Egress Solutions completed this egress window installation in Wenonah, New Jersey. The project included all of the excavation, site work, foundation cutting, and Boman Kemp egress system install with well, grate, cover, and ladder. After digging was complete, the window opening was cut using a diamond blade saw, the opening was framed, and we installed a custom window for this client to match the rest of the home. The Boman Kemp well system, in a white finish, was then properly hung and backfilled. This egress system was installed to keep a basement bedroom code compliant. The entire basement level was originally a walkout style and this particular bedroom had 2 large windows associated with it. The homeowners had begun to put a large addition on the home however, and these windows were now being covered by that addition. The architect let the homeowner know this and that’s when Egress Solutions was called. By adding our window system on the side wall of the basement bedroom, it now became code compliant again. Crisis averted and all parties were pleased with the end result.

Quote from Customer about their Egress Window Installation in Wenonah, New Jersey

“Egress Solutions was a great company to work with especially meeting our request to use a custom window to match the rest of the house.” In the end, Egress did everything and more that we needed. They even helped us track down a larger stucco issue/leak during the process. Wonderful company!” 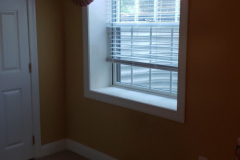 Don’t take the risk of an unsafe basement.

Call us today or click here to request your quote. We can help increase both the safety and value of your home.